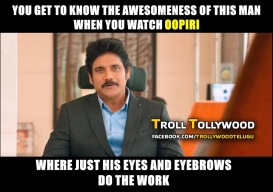 “Life is not the amounts of breaths you take; It’s the moments that take your breath away” – Hitch

I have been reading rave reviews on Oopiri from film critics since its release. Most of the standard newspapers in India and some websites have given 4/5 rating. Overwhelmed with happiness.

In a prelease oopiri team interview (the director, the producer and the main cast), the host has asked Nagarjuna how he could act sitting in a wheelchair  and charm the audience after Soggadae Chinnin Nayana where

he was bubbling with so much energy and he replied  ‘wheelchair lo kurchini chimpaeddamani’ with a burst of laughs among the team. He DID it INDEED, one of his career’s best performances.  Proud to be his admirer on any day, no ifs and buts. And of course as he coreectly points out in that interview, Oopiri will become a feather in his cap. He has so many of those …

There are few things touched my heart at Oopiri audio launch event and stayed there since then.

Some compliments for the cast and crew from media

Even before the release of the movie, the whole team has been constantly reiterating the point that the movie itself has handpicked every artist and technician for which the audience finally convincingly agree – Karthi replacing Jr. NTR, Tamanna replacing Shruti Haasan.

That actually explains why Bangaraju was felt and loved more than Ramu in Soggadae Chinni Nayana – Ramu’s character would be like slow poison as does Vikramadithya’s.

Hats off to Nagarjuna garu, Vamshi Paidipally told that he would not have taken Oopiri movie if Nagarjuna hadn’t had agreed to act in this movie. Truly there is no Oopiri without Nagarjuna. Nagarjuna is a boon to the telugu film industry as he has done movies that could stay eternal in the history of telugu movies – Ganesh Ravuri (translation for the above statement in telugu)

ot from time to time.

Oopiri stays as a classic movie as long as cinema lives👌🏻👌🏻👌🏻👌🏻

This is again from Ganesh Ravuri garu, film critic. Earlier I had used his critic review of Manam in my blog as I was awestruck with it and I have informed him too. I hope he would not mind using this piece again in my blog.

“Life is not the amount of breaths you take

It’s the moments that take your breath away” – Hitch

For every person, there are many oopiri moments – they are not mere amazing, magnificent, breathtaking moments, but they are life changing moments, faith assuring moments, heart touching moments …

like any other person, I too have few of them. I do not remember giving any of those moments to my parents but I am very much blessed to have some.

the very foremost one is meeting my husband in my life – our relationship is very very unconventional but it is Baba who brought us together and it is His blessing that we should live a life together on our own terms. I have learnt Many things in life from my husband. I can attribute everything to him for what I am today besides thanking my parents.

i want to dedicate this song to my husband for everything he had given to me.

when my husband passed away in 2008, my life was very void, but then again my husband showed the path to me to lead a purposeful life – volunteer service – enrolled in different projects –  education, environment and many more. That was a completely new #OopiriMoment to me when I lost my real oopiri – another life changing moment. (Neevalle kadha kalisa nanne nenila)

when one of my students (through my volunteer service projects) gave me a beautiful card when he passed the GED exam Another life assuring moment – assuring me that I am on a right path.

There is one dialogue in the movie The Blind Side which really hits deep into my heart (actually a slap on my face) and changed my perspective of my very own life. The conversation goes like this:

One friend of Leigh Anne says to Leigh Anne “You are changing that boy’s life’” and immediately Leigh shoots the bullet – “No, he is changing mine” – very powerful dialogue. People may not pay too much attention to this dialogue but it is so striking to me as I always tell people relating to my voluntary activities (especially teaching, that is where my main focus is) that I would be happy if I change the lives of at least few people. After I watched this movie, it changed my perspective of my very own life – Actually they are changing my life. Another #Oopiri moment.

and then Unnu and Prati – they just walked into my life physically when they were eight years old, I could still remember that day when they both walked into my room holding two chunnis. I haven’t thought at that moment they were just walking into my life to give so much love unconditionally. I believe strongly some #Manam factor with in our relationship. Another Splendid #Oopiri moment.

I just want to share a precious note Unnu has written on the eve of my birthday few years ago.

this piece of her emotions is quite assuring that someone loves me as much as I love them. Very emotional moment and invariably I cry whenever I read it. Love you Unnu and Prati for being there for me and thank God for bringing you two into my life. Ever ever grateful for this blessing🙏🏻🙏🏻🙏🏻

i have an everlasting passion for Akkinenis. I have grown up watching AnR  garu’s movies and he was my matinee idol. I have a humongous admiration for Nagarjuna for ages … And finally this month I met him – that was a real breathtaking moment for me. He was such a warm person and made us so comfortable that I could talk to him whatever was coming to my mind at that time spontaneously and felt like talking to a friend – a friend that I have met after a very long time and I had to share so many things with him. That was quite an exciting moment I had in the past 10 years. He wrote a nice message for me. I wouldn’t say this as a  #oopiri moment but #LifeAssuringMoment – it assures my admiration towards him, he just stood as tall as in my expectations about him, #BreathTakingMoments for me – that meeting gave me immense happiness.

we have a nice coffee shop on the corner of our road. I love it for many reasons  eventhough I hardly had coffee there. I am very much attracted by its ambience, it is a small place without any fancy decorations, but it is a simple place. They have a small special menu board outside the place and there are some nice writings on the other side of the board. I actually want to write a separate post on this coffee shop with some pics of its writings. Recently I got attracted by this one.

I walked passing this board atleast 4 times a day, and they usually keep the same message for few days. Whenever I passed this one, I kept on asking me this same question again and again, little depressing though. I wanted to take a pic of this but somehow I could not initially.

something happened Friday evening at work. Before I was about to leave, I went to ladies room to fetch some water for my plants. I saw our cleaning lady and I wished her and she said that she hadn’t seen me for a while. I told her that I went home for a holiday and returned back only a few days before and I inquired about how she has been doing. She told me that she too had been to Columbia (her home town, she is a Spanish lady) on vacation and suddenly she said she got me something from home. She went back to her desk and pulled a small packet from the drawer and gave it to me with a warm hug.

she got me a small card wallet. 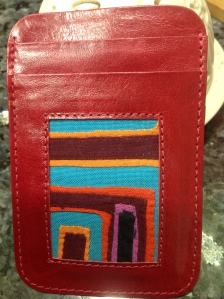 I was overwhelmingly happy that I was on someone’s mind even during their vacation time. That mere idea gave me immense happiness.

Why should I bother if I were a favorite person to somebody or not, just take the blessings of Baba as they come and be happy and contented.🙏🏻🙏🏻🙏🏻🙏🏻😀😀😀😀