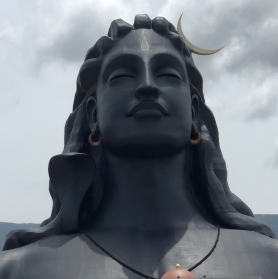 In between these two major events, Inner Engineering and Kailash Manasa Sarovar yatra with Sadhguru, another desire borne – to visit Dhyanalinga at ISHA Center Coimbattore, India, that too on Guru pournami day as I was reading somewhere  only two days in a month – Amavasya and Pournami days all the devotees are allowed to do water and milk abishekam to Dhyana Linga and the desire becoming intense day after day. When I went to India before I started Kailash yatra, I had to stay at Hyderabad for 5 days awaiting for my group visa to Tibet. I planned a day trip to Isha Ashram at Coimbattore on Gurupournami day. Even when I was still in US, I was making inquires (by sending emails to ISHA foundation) whether I could attend any of Sadhguru’s programs on that day as I wanted to see/hear him at least for few min. There was Sathsang in Tamil (apparently he was speaking only in Tamil) and it would start around 12 pm and goes until midnight as chandra grahanam or lunar eclipse fell on that day. Even though it is in Tamil, I just want to stay there for few min to have Sadhguru’s darshan and listen to him for few minutes even though I do not know Tamil. But I was told that once I sit in sathsang, I was not allowed to leave the place (I know how strict Isha people are in that

So I was there around noon time and i got awestruck looking at 112 feet Adiyogi welcoming me very affectionately.

Bhairavi (there was a long line there too), I went to Adiyogi Alayam. I read that water abhishekam f

rom 6 am to 12 pm and Milk abhishekam from noon

till 6 pm. So I did not want to miss my chances of water abhishekam. But of course due to some miscommunication, I did not get a chance for water abhishekam. And I was just sitting there not to loose my chances for milk abshishekam. My aid suddenly came with a vessel full of water and told me that it was Kailsah water and I could do abhishekam and my joy knew no bounds. Then I got to milk abhishekam also – do not think of what is possible and what is not possible.

Around 2:30 pm I cam out of Dhyanalinga and had some lunch and wanted to visit Linga Bhairavi but the temple was closed and I was told it would be opened at 5 pm. So I went to dhyanalinga and sat for 2 hours – I was not in any deep meditation or any of that sort, but some how I did not feel like getting out. when we came out and went to Linga Bhairavi temple, we were told that there was going to be a special pooja for ammavaru and the tickets were sold out by then and we were told to wait and may be after 7 pm ( after amma vari procession around the ashram premises, we would get to go in the temple. I was sitting out side and all the mantras that are being chanted in the temple are very well audible to us sitting in the open premises out side. And it is was nice cool evening and listening to the sacred chants was an amazing experience. I was sitting little farther from the temple and more people are coming and sitting very close to the temple, I also went and sit at a corner. after I sat there no one was allowed to sit next to me, even if people were coming , they were being directed ny the volunteers t go the other side. I thought I was sitting at the back and to a corner. To my amazement, amma varu came out for procession and she just quietly passed by my side, just goosebumps and thank all my stars with such a blessing (as I was little bit disappointed (not very much though) as I was not allowed to enter the temple) as ammavaru came and walked just by my side to bless me and compensate for the little disappointment I had undergone. 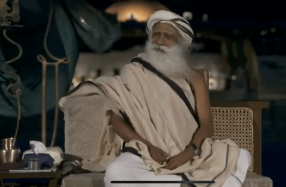 Once that happened, I immediately found my way out to go out the ashram as I need to catch my flight in a couple of hours. When I was approaching Adiyogi, I heard Sadhguru speaking in English. He was having Sathsang in front of Adiyogi in an vast open space. I was in an extremely blissful state as I could see him, hear him in English. I was standing there for another 20 min. He was almost at the tail end of his Sathsang in English, there was guru stotra for another 10 min by the fabulous Sounds Of Isha group and then Sadhguru started his Sathsang in Tamil.

I am thankful for every min of my visit to Isha Ashram. Every desire fulfilled in a beautiful way.