I really love this song especially when hearing from the great legend M.S. Subba Lakshmi takes me somewhere …
pallavi
shrIman nArAyaNa shrIman nArAyaNa
shrIman nArAyaNa nI shrIpAdame sharaNu
Narayana is never without His consort, Goddess Lakshmi. Goddess Lakshmi is referred to as “Shri”. Even in addressing people, we call him “Shrimaan….” this is just to ensure that the person being referred to is blessed with the grace of Goddess Lakshmi.
Here, Nayarayana is also referred similarly. And, the addressing goes on for three times.
I  bow to such a feet. I take shelter in such a feet.
Anupallavi
kamalAsati mukhakamala kamalahita
kamalapriya kamalekShaNA
kamalAsanahita garu.dagamana shrI
kamalanAbha nI padakamalame sharaNu || 1 ||
His wife is Kamala – Goddess Lakshmi, who sits on the lotus flower. He has the face like a lotus flower. He tends lotus. He loves the lotus flower. He has eyes like lotus flowers. He sits on a lotus posture. He rides on Garuda, the eagle. He has a lotus flower coming out of his Navel. 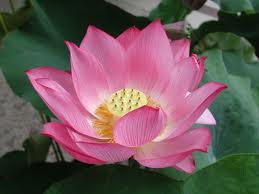 I pray for your lotus feet.
charaNam
parama yogijana bhAgadheya shrI
paramapuruShA parAtparA
paramAtmA paramANurUpa shrI
tiruveNkaTagiridevA sharaNu || 2 ||
He is the one who brings good fortune  to yogis. He is the supreme one. He is the great soul who is everywhere. He has the shape of the atom. He is the one who makes the atom what it is. He is the one who is there in Tiruvenkatagiri – Tiruppati.
Interesting points to note from the Kriti:
Kamala : The usage of this term in the anupallavi is beautiful.’Kamala’ is used a total of eight times in the Anupallavi. “Srimannarayana” in sanskrit is called “Ashtakshara” – the mantra with 8 letters in it. It is only fitting that the Kamalavasa’s connection with Lotus flower is mentioned eight times :
1. Kamala Sati – with a wife “Kamala”
2. Mukha Kamala – with a face like lotus
3. Kamala hita – He does good deed like a lotus flower; He is soft like a lotus flower; He tends to Lotus
4. Kamala Pirya : He loves lotus
5. Kama Lekshana – with eyes like lotus flower
6. Kamalasanahita – in the lotus posture. As someone pointed out kamalasanahita probably means ‘ the one who wishes good for the one who has the lotus as his seat (i.e. brahma)
7. Kamala nabane – with a navel from which a lotus flower springs up
8. Pada kamalame – The one with the lotus feet
Paramanu rupa : Shri Annamacharya lived in the 15th century. From 1408 to 1503. That time, the scientific world did not even know of ‘Atom’. But, here is the 15th century poet and he is beautifully talking about the basic building block of life and how Tiruvenkatapati is
there in that building block also.
Courtesy: http://krithis-theirmeanings-thestories.blogspot.com/2011/03/shriman-narayana-shri-annamacharya.html

It is a beautiful Annamacharya Keerthana which teaches us that the grace of Lord Venkateswara depends on how well a devotee thinks of him, irrespective of the various ways of worship.

Oh Venkatapati, your presence and grace depend upon how well a person thinks about you. When I observe sincerely, it is just like the size and quality of a pan-cake depending on the batter.

The Vaishnavas worship you with reverence as Vishnu. The Vedic philosophers tell that you are the Supreme Conscience. The Saivas believe that you are Siva and the Kapalikas praise you as Adibhairava.

The Sakteyas consider you as the manifestation of the supreme power Shakti. People chant your praise in a number of ways. Ignorant people assume that you are insignificant. The wise recognise your infinite greatness.

You are like the vast water pool to spread the lotus flowers. It is only the water of Bhagiradhi river that seeps into the wells by her side. Oh Sri Venkatapati, you are our protector. I surrender at your feet. It is transcendental bliss for me.